Ganga Dussehra is a Hindu festival celebrating the Descent of the Ganges. It is believed by Hindus that the holy river Ganges descended from heaven to earth on this day.[1] Ganga Dussehra takes place on the 10th day of the waxing moon of the Hindu calendar month Jyeshtha. The festival celebration lasts ten days, including the nine days preceding this holy day.

What is normally a joyous occasion has instead raised alarm this year, as a deadly virus has begun to spread across the subcontinent only days after the holiday.  The outbreak can be traced back to the Ganga itself, where millions of Hindus bathed in what is supposed to be the purifying waters of the sacred river.

Symptoms started surfacing in the city of Haridwar, where people first reported feeling light-headed and nausea after bathing in the water.  As the days went by, the symptoms worsened, becoming more severe.  Those afflicted experienced memory loss, extreme mood swings, and a significant drop in body temperature.  As of the writing of this article, at least nine people have died from the virus, but many more may have been infected.

The World Health Organisation (WHO) has warned that the unidentified strain appears to be highly contagious, and that residents should exercise extreme caution in the affected areas until the outbreak is contained.  Indian officials have begun moving in and securing the areas.  If the spread cannot be contained, an orderly evacuation may be ordered.  So far, treatment for the affliction has been ineffective.

This isn’t the first time something like this has happened in this very region.  There are stories about a mysterious plague that racked the area thousands of years ago during an ancient war that was fought primarily in Western Asia, but saw a series of small battles raging in other parts of the world.  Most notably, India, along the shores of the Ganga.  These stories, however, are thought to be myth, as it tells the tale of mighty and righteous warriors defending the people of India from dark forces who brought the sickness with them.  There is no real evidence to back up such a claim.

But myths and legends often have some truth buried within them.  The National Library of India does contain records about a battle that took place on the banks of the northern Ganga in what is today Uttarakhand.  Though details of the battle are sparse, the records do indicate the fighting was over a plague that “came from the water” and that warriors in black cloaks of unknown origins helped to purify the Ganga and beat back the invaders. 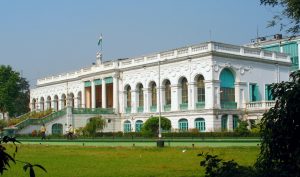 Unsurprisingly, this brief passage in obscure, little known records in the National Library has captured the attention of the Azrian community in India.  Azrian legend talks in great detail about a divine war involving the “Black Cloaks”, two of which were allegedly Hindu.  The recent attack at Westminster Abbey and the video footage that showed what appeared to be Black Cloaks fighting at the Abbey has fueled speculation that the stories of the ancient battle are true, and that the Black Cloaks recorded at the Abbey are the same Black Cloaks of legend.

As far-fetched as that may seem, nothing can be ruled out these days.  As a man waiting for treatment at a local hospital in Haridwar said, “The only certainty we have is truth.”

What exactly that truth is remains to be seen, and that’s what authorities are desperately trying to figure out at this very moment.

For more information about the fabled war spoken of in this article, please see The Shattered Star Universe.