As Tensions Rise, People Look to the Ancient Past For Answers

The Human Right Act.   An attack at the Hill of Tara.  A murderous spree.  Hidden secrets being revealed, and legends from the ancient past returning to the present providing full proof of their existence.   It’s all enough to make any sane person question their sanity and fear their very reality.  These are extremely surreal times we suddenly find ourselves living in.  Once reliable and trusted sources of news and information have been thrown into question.  Old relationships are being scrutinized, and government is now seen as the keeper of forbidden knowledge barring the populace from learning the truth about what is really going on, and, more importantly, what may lie ahead.

The current human-Azrian conflict may have its roots in an ancient Celtic event known as the Second Battle of Magh Tuireadh.  The battle, according to myth, took place in Ireland and involved the Tuatha De Danaan, the Celtic deities, rising up against their High King Bres, who was, in laymen terms, a very bad king.  At the end of the battle, the goddess The Morrigan gave a prophecy about the end of the world.  Like most ancient prophecies, it was very vague and open to interpretation.  Except for one strangely specific reference where the Morrigan talks about a family being torn apart.  That reference has drawn considerable attention due to the recent events at the Hill of Tara.

The famous Biblical tale involves an event that wasn’t actually in the Hebrew Bible, but is talked about in the New Testament’s Book of Revelations:  the War in Heaven.  It was made famous by John Milton in his epic poem Paradise Lost. In the poem, Lucifer and his rebel angels rose up against God and were cast down into the underworld by the archangel Michael.  However, the graphic novel Gabriel, takes a very different view of this tale.

In Gabriel, the roles appear to be reversed, wherein Lucifer, known here by his original Canaanite name Helel, was actually defending Heaven from the Israelite god Yahweh, who along with his people, had invaded Canaan and sought to wipe out its pantheon.  Gabriel, the titular hero, is then cast down by the Canaanite god El to begin an epic journey across the mortal world to warn other pantheons of their impending doom at the hands of Yahweh. 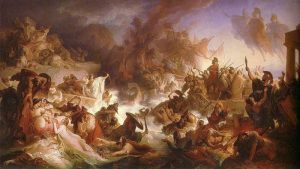 Though dismissed as just a comic book, the character of Gabriel has drawn attention because of his apparent desire to have a family of his own.  It is this family, readers speculate, that is the same family The Morrigan alludes to as being torn apart in her prophecy at the end of the Second Battle of Magh Tuireadh.  This is all speculation, of course, but the fact that both The Morrigan’s prophecy and the War in Heaven appear in the same issue of the comic – the first issue, no less – has many wondering if they are tied together, and more importantly, if they somehow connect to the incident at the Hill of Tara.

Copies of Gabriel are no longer available on shelves, but word is there are underground copies floating about, and one just needs to know where to look to find them.  The truth may be out there somewhere, and those that believe are stopping at nothing to find it.  Which, in the current climate, may prove more dangerous than ever.

For more information about Gabriel, see The Shattered Star Universe.