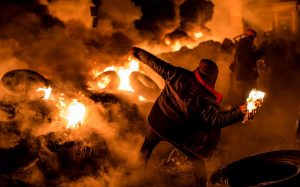 When the Human Right Party (HRP) came to power in Britain, they promised that the Geneva bombing would never be forgot.  That the primacy and supremacy of the Human Race was absolute.  They would remind the Azrians that God intended humanity to dominate the Earth.  The HRP ran on that platform, and the HRP won on that platform.  Resoundingly.  The cornerstone of their entire campaign was the Human Right Act, the tool that would be used to remind the Azrian people of their place in the world.

The size of the HRP’s victory and their brash message caught many Britons off guard. How did we come to this, many wondered.  How did the country become so divided that a healthy majority of the people fully embraced such a polarizing message?

The answer lies in the history.

In the beginning, there was a man named Saul Abraham who was the CEO of Sion Labs.  He was suave, charming, and learned of seemingly all things.  He decided to step down as leader of his company and become the leader of a political party called the Human Rite Party.

Now, the Human Right Party had one unifying message:  Keep everyone separated as much as possible.   That was their whole, entire platform.  It resonated with Britons who, frankly, have a history of conquering people, and then telling those same people to stay away.

To no one’s surprise, the HRP’s target was one specific group.  The Azrians.

Humans, by nature, have always felt threatened by Azrians.   They are real life superhumans, after all.   Stronger, faster, and smarter than the average person.  And they live longer too.

Humans and Azrians have a very, very, VERY long history of not getting along.  Since Biblical days in fact.  And they have perfected the art of hating each other.  Just like in Biblical days.  We are exceptionally good at it.

But humans, being human, came to dominate the Earth because they simply multiplied much faster than the Azrians.  Since humans controlled the world they made the laws.

As a result, humanity forced Azrians into the shadows, where they stayed hidden from the public eye.  Humans ruled the world, Azrians got to live in that world so long as they kept their abilities hidden.  Otherwise, they would likely be killed on the spot.

Things got along in a sort of ignore-the-huge-elephant-in-the-room kind of way, until the Geneva bombing blew everyone’s carefully laid plans apart.

Human and Azrian leaders had actually gathered to talk about their problems out in the open.  They had decided that the times were changing, and it was now time to grow up and sit down and talk things out, like adults.  Grievances on both sides would be aired, and for the first time ever, the Azrians would put forth a formal request for the one thing they always truly wanted:  a country of their own.

Leaders on both sides sat in negotiations and worked out various agreements and plans that would reshape the world as we know it.  Bringing great social and cultural change to the status quo.

But as you can imagine, there were those on both sides who stood to lose everything by having peace in our time.  For them, the talks had to end.

They ended horribly.  A bomb ripped through the UN building in Geneva killing both human and Azrian leaders alike.  The Azrian Underground, a designated terrorist organisation, claimed responsibility for the act, though many say they had human help.

Nonetheless, the outcry was deafening.  Humans, already suspicious of Azrians, had confirmation that their fears were justified.  They demanded vengeance for the humans who had been killed.

The response in Britain, was the Human Right Party.  Their leader, the aforementioned Saul Abraham, inflamed anti-Azrian sentiment and spoke directly to the people’s fear and anger.  He channeled it.

The centerpiece of his campaign was the Human Right Act.  A law which would require all Azrians to register with MI5 and be under 24-hour surveillance by the UK government, whether they had ever used their abilities or not.  Their constitutional rights where secondary to the national security rights of Great Britain.

Their message of unification through separation was the linchpin of their power.  For the only way the Human Right to take charge was by turning everyone against each other.  You were either with humanity, or you were with the terrorists.  Human or not.  This was about survival of the species, they said.  It was about those we had lost.

Their popularity soared.  And in the general election, the HRP won a comfortable majority.   Just like that, Saul Abraham became the new prime minister.

Woe betide all Azrians and their sympathizers.

Fast forward to today.  Despite all the legal challenges, delays, and backroom deals, Prime Minister Abraham made good on his campaign promise.  The Human Right Act became the law of the land.  All Azrians instantly became dangerous threats that needed constant monitoring.  Those that failed to register, were hunted down like dogs.

Violence erupted across London immediately after the law was passed, and it hasn’t stopped since.

As the discontent and unusual activities spread, many are left wondering if this is only the beginning, and if there are better days ahead for Great Britain.

Published in Front Page and Politics